The History of Fukagawa Fujimi

A Boathouse Founded at the End of the Edo Era 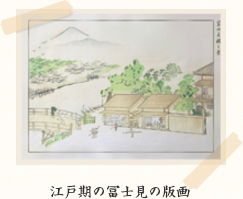 “There’s nothing more precious than this for us at Fukagawa Fujimi” says Kazuo Ishijima, the 5th master of Fukagawa Fujimi, pointing to a picture hanging on the wall of his boathouse. “A neighbor brought it to us saying ‘your boathouse is in this picture’. You can find the original copy at the Fukagawa Library”. The picture is titled “Fujimi-bashi no kei (A view of Fujimi bridge)”. The picture depicts a beautiful view of Mount Fuji over the Fujimi bridge and “robune” (small wooden boats) line the dock foot of the bridge. Next to the bridge are two boathouses, “Hamaya” and “Fujimi”. It is a woodblock print created by an artist named Tomekichi Inagaki around the end of the Taisho era (early 1920’s). 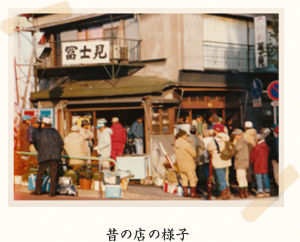 The description reads “The Hirano bridge connecting Irifunecho and Heikyucho used to be called the Fujimi bridge up to June 1874. As the name indicates, the grand view of Tomidake (now called Mount Fuji) could be viewed across the Suzaki field. To the west of the bridge are Hamaya and Fujimi, which send out boats for clam picking in the springtime, cooling down in the summertime, moon watching in autumn, as well as rent out gear for fishing lovers. The two story house on their side is Yamatoya, a restaurant, on the land owned now and then by Sabei Kashinokiya”.

Fujimi was founded at the end of the Edo era (mid 1800’s), which gives the boathouse over 150 years of history. “We started out in Tomioka 2 chome, and this picture is from back then. As reclaimed land increased, we moved to where we are now”. Fishing goby from boats used to be entertainment for wealthy men, which diffused to become a hobby for the broader public as time went by. 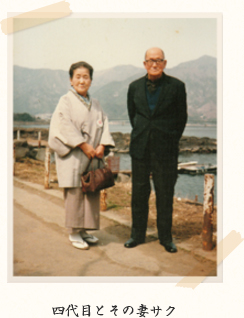 “I’ve heard that they used to fish off of stepladders farther out in the waters” says Natsue, the chief hostess. While stepladder fishing no longer exists, some traditions have survived.
For example, goby fishing while the boatmen row the “robune (small-sized hand rowed wooden boat)”. This is called “nerifune”.
“In the past, people used to go to fishing points by rowing these wooden boats, but now they pretty much go to the fishing point by a motored boat, stop the engine, and row from there as guests enjoy goby fishing” continues Natsue. A scene that evokes memories of the traditional lifestyle of the working class in the area. At Fujimi, they still operate these “nerifune” in November and December every year. There are many fans of these “robune”, but now Fujimi is the only boathouse that offer “robune” tours.
Rowing a “robune” is difficult and only veteran boatmen have this skill. Fukagawa Fujimi now owns six Japanese boats that can be used for “nerifune”. With the declining number of skilled boat carpenters, maintaining the existing boats is becoming a challenge for them, too.

Gobies used to be found all the time in waters in the vicinity, but the number has seen a stark fall with the increase of reclaimed land. Especially, as the 530,000m2 lumber yard in the Shinonome area abolished into reclaimed land, gobies lost their spawning ground as well as habitat. “We don’t catch very many gobies anymore” sadly mumbles the 5th master. His usually masculine tone lost power with a gloomy face. 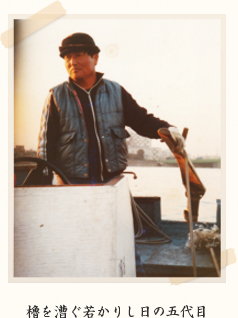 When the 4th master ran the company, fishing boats was Fukagawa Fujimi’s main business and guests really caught lots of fish. But the negative side of what paved the basis of modern Japan, the bad image of water pollution, and the diversification of hobbies lead to dwindling number of guests. The number of fish has decreased as well. While water quality has substantially improved, spawning grounds and habitats have vanished. A way for humans and fish to coexist needs to be found, or it would be like cutting our own throats.
There were times when the area was a good fishing ground for eel and seaweed, too. “In the good old days, there were lots of eels around here, and there was a day when I was in junior high school that I earned two years’ worth of an adult’s salary overnight. But I was out catching eels all night into the morning and was scolded by my dad who was worried where I’d gone”, the 5th master confides with nostalgia. 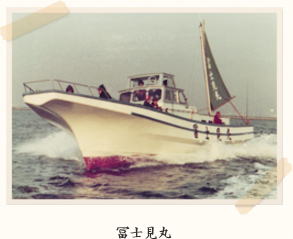 Our ancestors were Samurai that worked for the Edo castle’s Shogun. They probably couldn’t sustain a living only as a Samurai and started the boathouse. But they were Samurai and were not very good at business. He probably had his wife run the boathouse. “Just like my wife, the chief hostess back then was probably a strong woman” says the 5th master with a mischievous smile. “I wasn’t alive back then to see for myself. To be honest, I don’t know about that far back ago” laughs Koji Ishijima, the 6th master, but by all means, Fujimi is a precious boathouse full of nostalgic working class friendliness and kindness.